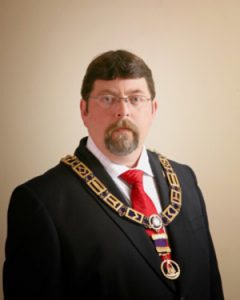 Brother Record was born in June of 1969 in the beautiful Monterey Bay at Fort Ord Callifornia, the oldest son of Dan and Mary Record. The family relocated to Utah in 1973. Brother Record grew up in Sandy, Utah with his two Brothers. He graduated from Jordan High School in 1987 and from Columbia College in 2001. After High School he enlisted in the U.S. Army , serving 4 years, most of which was on the Island of Oahu, Hawaii. After leaving military service, Brother Record spent a couple years working for Kmart before joining with Rainbo Oil. Through corporate acquisitions, Brother Record has worked for Rainbo Oil, Amoco Oil, British Petroleum, and most recently Tesoro Petroleum where he works as an Account and Merchandise Manager. Brother Record is also the owner of Doc Holliday Tattoo, where he spends his free time tattooing.

Brother Record petitioned Acacia Lodge #17 in Salt Lake City in 1997, receiving his first two degrees that fall, and was Raised to the Sublime Degree of Master Mason on January 13, 1998. He spent nine years as an Officer of Acacia Lodge, serving as Worshipful Master in 2005 and 2007. He was appointed to the Most Worshipful Grand Lodge, F&AM of Utah in 2004 by Most Worshipful Brother Steven D. Lancaster. He served the Grand Lodge as Tyler, Senior Steward, Sword Bearer, Senior Deacon, Orator, and twice as Lecturer. He was elected as Junior Grand Warden in 2010. He is a member of the Ancient and Accepted Scottish Rite and was coronated a 33o in 2009. He is also a member of the Midvale York Rite Bodies, a Noble of El Kalah Shrine, Served as Worthy Patron of Lynds Chapter #1 OES twice, and is currently a member of the Salt Lake Masonic Temple Board. Brother Record is also a founding member of the Craftsmen Riding Association which formed in 2012.

Brother Record currently resides in West Valley City with his wife Ginger and their two toy poodles, Daisy and Kono. Their oldest Son Joshua is currently serving in the US Air Force, and their youngest Son Aaron currently works at the tattoo shop. Their Middle Son Danny passed away in June of 2009 after a long battle with Leukemia. All three Sons are members of Acacia Lodge #17.