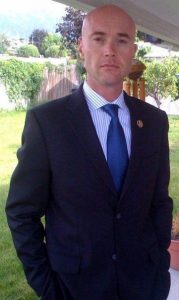 Brother Liley grew up in rural Hunterdon County, New Jersey. He is the oldest of eight children with six sisters and one brother. His parents were also Foster Parents to many children throughout the years. He attended the public schools and graduated from the local community college. He has held a job since he was 10 years old starting out delivering the local county newspaper. In 1994 he moved to Salt Lake City, Utah and entered the mortgage industry. He has worked for national wholesale and retail mortgage banks and on the local Bank and Credit Union level. He is currently employed by Castle and Cooke Mortgage in Salt Lake City, Utah.

Brother Liley has a keen interest in history specifically that of Scotland. He has served as a board member of the St. Andrew’s Society of Utah, and was the Clan Sinclair Association Commissioner in Utah for many years. One evening at a Society gathering a friend overheard him speaking about the supposed connection between the Knights Templar, the Clan Sinclair and Freemasonry. This friend had just taken his degrees in Wasatch Lodge and later became his first line signer.

Brother Liley comes from a Masonic Family. His father was a Demolay. His Uncle, Grandfather, and Great Grandfather were all Master Masons. His Grandmother and Aunts were members of the Order of the Eastern Star.

Brother Liley petitioned Wasatch Lodge No. 1 in Salt Lake City, Utah in the Fall of 1997 receiving the degrees in the Spring of 1998 serving as Worshipful Master in 2004. He is a founding member of St. Andrew’s Lodge No. 34 serving as Worshipful Master in 2006 and 2007. He is a Past Master 2014 of Tintic Lodge No. 9 Eureka, Utah and has honorary memberships in lodges in both England and Scotland. He is also a founding member of Camp Floyd Historic Lodge No. 205. He holds membership in numerous appendant Masonic Organizations having served as a presiding officer in many of them. He has masqueraded as the Bear for the El Kalah Shrine Wreckers and served the foot Patrol for over 10 years. He was coroneted a 33rd Degree Inspector General Honorary of the Ancient and Accepted Scottish Rite in August 2007 in Washington DC. He currently serves as the Personal Representative to the SGIG in Utah. He is a member of the KYCH, HRAKTP, The Red Cross of Constantine, CBCS and founding Senior Warden of Keystone Mark Masons Lodge No. 0.

Brother Liley has served the Grand Lodge of Utah on the Public Relations Committee for many years. He was appointed to the Grand Lodge line mid year 2004 as Grand Pursuivant. In 2006 he was appointed Grand Sword Bearer, in 2007 Grand Orator and elected Junior Grand Warden in 2008, Senior Grand Warden in 2009, and Deputy Grand Master (Grand Master Elect) in 2010.

Brother Liley lives in Cottonwood Heights, Utah with his wife Kelli their Boston Terriers Red and Rocko. He has two wonderful daughters Tessa and Quinn. He is an Amateur Horologist, snowboarder, bicyclist, marathon runner and he likes to ride a motorcycle.